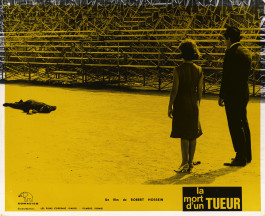 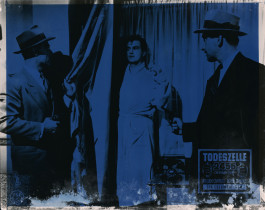 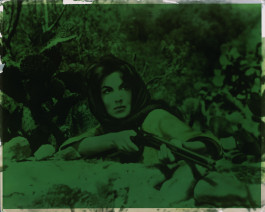 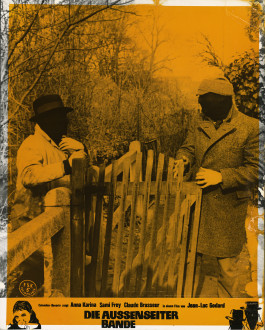 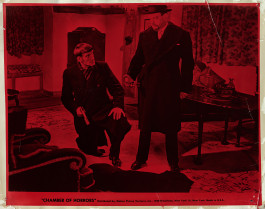 is it statuarism that moved dunja evers to turn to film stills? what a question! how could an artist, who uses super-8 and video to investigate how time leaks away and celebrates the medium’s inherent gift of repetition by having cigarettes smoulder out, candles burn down and fireworks light up the night sky time and time again through looping not be fascinated by the demonstrative pausing of time in an aesthetically concentrated moment? by prescribing a leap into another dimension for film stills, as they circulate in a standard format through everyday commerce, and by presenting them in the tradition of the tableau in the exhibition space, she directs attention to elements of composition, strategies of guiding the gaze, lighting control, figural and special configurations. accordingly, “chamber of horrors nr. 33” cites a still announcing the film “la mort d’un tueur” (death of a killer). we see a tense constellation: a woman and two men. one of the men had to lose his life. he has tipped forward and is lying defenseless on the ground. the weapon has slipped from his right hand. stiff and silent, the two survivors are looking at their “work”. between their feet, a pistol. from where it is lying, it would have been the woman who did the shooting – quicker and more decisive than her counterpart. at the same time, the pistol on the ground proves to be an element uniting them, just as if the woman and the man – she in a cocktail dress and he wearing a solidly middle-class suit and hat – had, in unspoken agreement, pulled off a “masterpiece” by doing what had to be done: restoring order.

annette tietenberg in in »dunja evers, we are not alone« exhibition catalog, kehrer verlag 2009