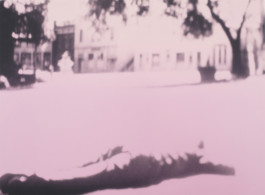 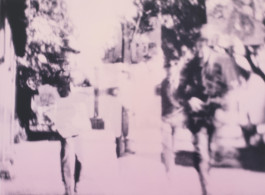 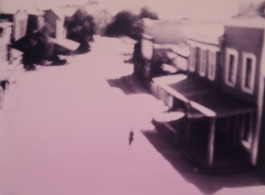 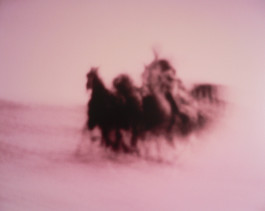 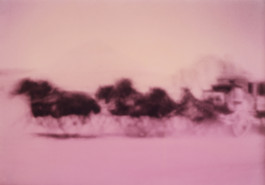 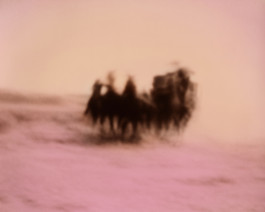 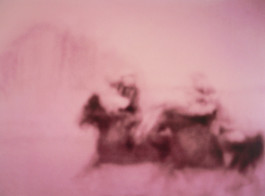 in 2005, that series came about, which reveals the sources of dunja evers’ fundamental pictorial researches like never before: cowboys uses pictorial material from western films, a process in which the time-based characteristics of the medium are largely preserved in the final work. in earlier works, the artist had already used short filmic sequences, which she photographs and uses as a basis for further stages of her work. the long exposure creates that characteristic blurring, which almost causes the motif to disappear, as it does under the monochrome layers of colour in portraits. with cowboys, by contrast, the motifs do not melt away in the same way, but remain clearly perceptible behind the pink overpainting characteristic of the entire series. this depth of colour is surprising at first sight and combines the luminosity so characteristic of the classic western’s scenery with an artificiality of appearance, which locates dunja evers’ cowboys decisively in the present and with that in the intermedial discourse of contemporary art. here, short sequences of images from famous westerns, stagecoach (1939) and she wore a yellow ribbon (1949) by john ford or respectively high noon (1952) by fred zinnemann (1907-1997), form the point of departure. they all belong to the classics, not only of the genre, but of film history overall.

konrad bitterli in »dunja evers, we are not alone« exhibition catalog, kehrer verlag 2009